UNQUIET SOULS is a contemporary YA novel based on the premise that restless spirits may attempt to satisfy their thwarted passions through the living.

The story is set in present day Maine but has connections to the Salem Witch Trials of 1692.I am descended from Mary Towne Estey.  She and her two sisters, Rebecca Nurse and Sarah Cloyce, were accused of witchcraft. Mary and Rebecca were hanged. During my research for this book I was inspired by Margaret Jacobs, accused at age seventeen.

There are no known images of Margaret Jacobs or her grandfather, just as there are no known trial records.  Her grandfather wears a red cape (note his walking stick on the floor).  Margaret is in the tawny skirt, pointing – accusing him of witchcraft.  Her mother, known to be mentally disturbed, lunges at her from behind. Margaret’s father, George Jr. is beside George Sr.  The young people in the front are having “fits”.

Miniature believed to be of Samuel Parris 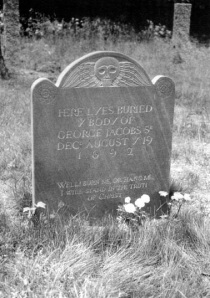 Here is some of my sea glass collection…

Here’s my Unquiet Souls Pinterest Page, in case you’d like to see some more of my inspirations for this book.

2 thoughts on “YA Novel UNQUIET SOULS”

About Me & My Books